On June 12, 2019 there in the hall of E.Tursunov took place the creative meeting “Pushkin as the prophet of Russian civilization” with the winner of the State prize of Russia, the well-known actress, TV-host, public figure Olga Budina, dedicated to the 220-th birthday of the great Russian poet. 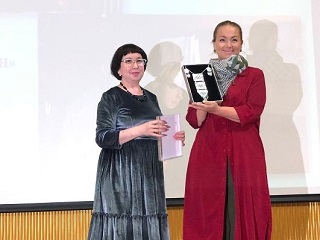 There within the framework of the holiday is organized the book exhibition “Kazakhstan and Russia: friendship sealed by time” dedicated to the 25-th anniversary of the twin-cities Moscow and Almaty.

In 1994 on October 3 there was signed the agreement of cooperation between Almaty and Moscow in the trade-economic, cultural and scientific-technical spheres. To this event is dedicated the book exhibition, where there was presented literature about the development and strengthening if the political, trade-economic, investment, cultural-humanitarian and scientific-technical cooperation of the two countries. The print materials were presented from the fond of National library of the RK in the Kazakh, Russian, English and other languages.

The second section of the book exhibition discloses the creative activity of the great poet. His poetry is the brightest specimen of harmonically fine art in the Russian and world literatures. The given festivity is timed to the state holiday of the Russian Federation – the Day of Russia celebrated on June 12.

The third section of the book exhibition is dedicated to the creative activity of the well-known actress, TV-host Olga Budina. There are the articles and fragments from the films, where she played parts. The activity was opened by director of National library of the RK B.K.Ospanova.

The creative meeting with Olga Budina was very interesting. She participated in more than 30 films and serials. Olga herself was the first Russian actress, the films with the participation of whom were nominated many times for the “Oscar” prize and she is a member of the jury of different cinema festivals. She told the audience about some interesting facts from the life and creative activity of A.S.Pushkin, she performed the romances and read the verses of the genius poet. There to the fond of National library of the RK from the General consulate was presented as the gift the new literature.

There in the creative meeting participated: the partners and the friends of the library, the workers, the lovers of poetry and cinema, students of universities and colleges of Almaty city, creative public of Almaty city and mass-media representatives.

We have 273 guests and no members online