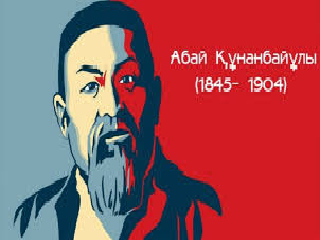 There in the reading hall “Kazakhstan kitaptary” is organized the book exhibition “Uly khalyktyn – Uly Abaiy” dedicated to the great  poet of  the Kazakh people, the unsurpassable master of word, philosopher, the founder and the  first classics of Kazakh literature Abai Kunanbayev.

Abai Kunanbayev was born on August 10, 1845 in the place called Syrt-Kyskabulak of  the Semipalatinsk region (now the Eastern-Kazakhswtani region, the Abai district). He continued his home education at the madrasah with the mullah Akhmet-rizy in Semipalatinsk city where they taught the Arabic, Persian and other Oriental languages. At the same time Abai visited the Russian school.

Abai Kunanbayev came from the rich and prominent clan of the biis and aristocrats. Thanks to his grandmother Zere and mother Ulzhan there in Abai woke an early interest to the creative activity and poetry. Both mothers directed their great son onto the way of the truth and serving the people, instilled in him rejection for cruelty, injustice and stupidity. The greatness and significance of these two women in the history of the people are not only in that they brought up Abai but also in that through his creative activity and personality they influenced the spiritual and moral life of the descendants. The nest wonderful teacher and mentor of young Abai was the Kazakh people. Abai strove to master the specimens of orator art, the rites and rules, by which the people lived, the examples of just judging in most complicated and argued issues between the people and tribes.

Aming the early verses of Abai one meets the lyrical verses, written under the influence of Oriental classical poetry, the verses-impromtu, created in the style of folk poetry, in the spirit of creative activity of the poets-singers-improvisers of those times. The poet created approximately 170 verses and 56 translations, there were written poems, the words of edification (“Kara sozder”). He introduced into the Kazakh verse-formation the new sizes, rhythms and verse forms. There in the poem “Iskander” are put against each other the wisdom represented by Aristotle and the avidity represented by Alexander from Macedonia. A considerable event for the poet was his communication with the political exiled figures E.P.Mikhaelis, N.Dolgopolov, S.Gross. There upon the formation of the world outlook of Abai influenced the poets and scientists of the Orient – Firdousi, Alisher Navoi, Nizami, Fizuli, Ibn Sina and also the works of the Russian classics. He translated into the Kazakh language the works of I.A.Krylov, M.Yu.Lermontov, Goethe and Bairon. There into the circle of his interests entered the world culture and philosophy.

Abai Kunanbayev was also a talented and original composer. He created about twenty melodies which are popular in our days. Some of his own verses he put into the music and the song with his verses “Kozimnyn karasy” became the people’s song.

The poet exerted great influence upon the Kazakh national intellingentsia being born at the end of the XIX – beginning of the XX centuries. The leaders of “Alash-Orda” movement perceived Abai as their spiritual leader for the revival of the Kazakh nation. Alikhan Bukeikhanov became the first biographer of Abai. The writers, literary specialists, linguists, philosophers, psychologists of the whole world turn to the creative activity of great Abai. His works inspire the younger generation for serving their people and support in them the striving for enlightenment and knowledge.

The literary and aesthetical heritage of Abai is the national pride of the Kazakh people. The image of the outstanding poet-enlightener Abai is embodied in the works of literature, music, imitative art. The works are translated into manu languages of the peoples of the world.

Abai Kunanbayev died on June 23, 1904. He is buried in the valley of Zhidebai, near the Chingis mountains.

There in memory of the great Abai is established the State prize of Kazakhstan in the sphere of literature. There in honour of the poet are named a city, administrative centers, settlements, streets, theatres, libraries, schools and squares in the republic and abroad. Annually there are held different activities dedicated to Abai’s birthday: the days and evenings of poetry, the book exhibitions, scientific conferences, poetical hearings and the laying of flowers to the monument of the poet.

In 2020 there under the aegis of UNESCO and TURKSOI will be the celebration of the 175-th birthday of Abai Kunanbayev. The main purpose is the wide propagation of Abai’s world outlook and the acquaintance of the youth with his spiritual heritage.

There upon the book exhibition “Uly khalyktyn – Uly Abaiy” out of the fond of National library of the RK are presented the materials about the life and creative activity of Abai, his works and also articles about him by well-known personalities.

We have 280 guests and no members online