“Til tatulyk belgisi” dedicated to the Day of languages of the people of Kazakhstan. 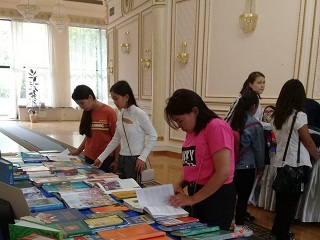 On September 5, 2019 there in the House of friendship of Almaty city by the National library of the RK was organized the exit book exhibition “Til – ulttyk belgi, khalyktyk mura” within the framework of the republican scientific-practical conference “Til tatulyk belgisi” dedicated to the Day of languages of the people of Kazakhstan.

There by the Decree of the Government of the RK was taken the decision to establish on September 5 the Day of languages of the people of Kazakhstan. Namely on this very day there was born Akhmet Baitursynov. The holiday is annually celebrated on the day of birthday of the founder of Kazakh philology, scientist-linguist Akhmet Baitursynov.

The purpose of the activity is: the strengthening and development of public concordance, Kazakhstani identity, tolerance and mutual understanding based upon the principles of linguistic culture and common human spiritual values.

There at the book exhibition out of the fond of National library of the RK were presented the materials disclosing the history and modern life, culture and art, traditions and rites. There with the book exhibition acquainted the head of the group “Kazakstan kitaptary” K.N.Kasymbekova.

We have 222 guests and no members online