Meeting with the labor dynasty of doctors Zhaparov.

On June 17, 2019 at 15:00 hours there in the Kazakstan kitaptary hall for the purposes of implementation of the Address of the First President N.Nazarbayev  to the people of Kazakhstan named “The growth of welfare of the Kazakhstanis: the heightening of incomes and quality of life” took place the meeting with the labour dynasty of the doctors of the Japarovs by the issues of heightening of quality of life of the population for the collective of the library and the studying youth of the city. 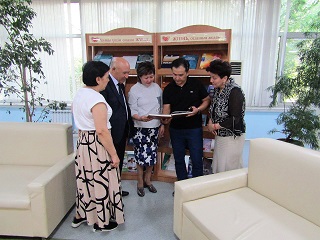 On June 16, 2019 on the Day of medical worker there by the Ministry of healthcare of the Republic of Kazakhstan for the inculcation into practice of thye new modern methods of treatment and operations A.M.Zhaparov is awarded by the badge “For the contribution into development of healthcare”.

There at the meeting the guests gave clarifications on the Address of the First President N.Nazarbayev to the people of Kazakhstan dated October 5, 2018 “The growth of well-being of the Kazakhstanis: the heightening of incomes and the quality of life”. The guests told about the devotion of doctor, s cientific activity and the love for medicine which is not interrupted in the family for more than 60 years alread y. They also noted that only strong, professional personalities sure of themselves can achieve the set goals and are needed by time and society. The narrations of the speakers were accompanied by the dem onstration of the documentary film about the family, scientific activity and everyday life of the Zhaparovs’ family. There within the framework of the evening were organized the book exhibition from the fond of Nat ional library of the RK, where there were presented the works, the abstracts of theses and dissertations of the father and son Zhaparovs, articles on the pages of the periodical press. The participants of the activity were the representatives of the “Arna” medical centre, masters-degree holders of the Kazakh National university after Al-Farabi and also the workers of the library.

In conclusion the participants of the activity thanked the guests for the open dialogue and the proposed offers of the development of Kazakhstani science and also the answers for the questions which were of interest for the youth.

We have 164 guests and no members online