The Annual council of the heads of the libraries of Kazakhstan.

On June 21, 2019 there in the hall after N.Dauletova took place the Annual council of the heads of the libraries of Kazakhstan. 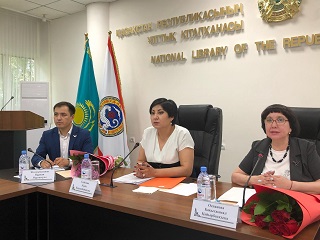 The activity was opened by director of National library of the RK Ospanova B.K. and presented the report by the results of activity of the libraries for the year 2018. The purpose of the council was the discussion of the topical problems of the library branch of the republic: the work upon the draft project of the Conception of development of librarianship business in the Republic of Kazakhstan, for the introduction of amendments and additions to the Law of the RK “On culture”;

about the activity of the Kazakhstani Library Union (the report, the selection of the Board, the determination of the further strategy and others); the issues of opening of the Centre of certification in librarianship business on the basis of the KLU and a number of other important issues.

There in the work of the council participated and made reports the following: acting Executive secretary of the Ministry of culture and sport of the RK K.K.Seyitova, Chief expert of the library of Nazarbayev University P.M.Lapo, Head of Department for the development of human capital of the Chamber of Enterpreneurs of Almaty city of National Chamber “Atameken” V.M. Tzin, the heads of National and National academic libraries of the RK, the republican, regional libraries and the Central Library Union, the libraries of colleges and universities, the heads of the services and departments of National library of the RK.

There within the framework of the sitting took place the awarding of the winner of the Republican competition for 2018 named “Okyrmany ozyk olke” – the Northern-Kazakhstani regional universal scientific library after S.Mukanov.

We have 261 guests and no members online