«One country – one book - 2020” is organized the book exhibition dedicated to the life and creative activity of the well-known people’s writers of Kazakhstan Mukhtar Auezov and Anuar Alimzhanov. 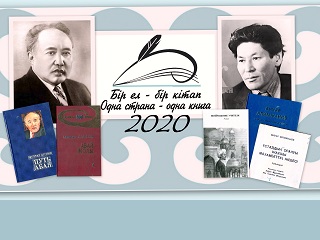 There in the reading hall of “Kazakstan kitaptary“ department within the framework of the republican action «One country – one book - 2020” is organized the book exhibition dedicated to the life and creative activity of the well-known people’s writers of Kazakhstan Mukhtar Auezov and Anuar Alimzhanov.

The republican action “One country – one book” is carried out in Kazakhstan from 2007 by the initiative of the National academic library of the RK with the support of the Ministry of culture and sport of the RK. There by the decision of the commission of the Republican action “One country – one book” for the reading by all the people of the books of the year 2020 were chosen the works of the two well-known writers: the novel-epopee “The way of Abai” of Mukhtar Auezov and the novel “The return of the teacher” of Anuar Alimzhanov timed for the 175-th birthday of Abai Kunanbayev and the 1150-th birthday of Abu Nasyr Al-Farabi.

The purpose of the action is the popularization of Kazakh literature, the interest for studying the literary heritage of Kazakhstan, and also assistance for the intellectual-spiritual development of the Kazakhstani society.

Mukhtar Omarkhanovich Auezov (1897-1961) is the classic of Kazakh literature, the specimen of artistic prose, orator art, national thought of the Kazakh people of the XX-th century, the writer-artiste, dramaturgist, scientist, pedagogue, public figure.The author created more than twenty novels, multiple magnificent stories, short novels and plays. The crown of his creative activity is the four-volume epopee “The way of Abai” published in 1942-1956. The work consists of four books.

The author in the novel-epopee describes the life of the great Kazakh poet Abai Kunanbayev, in which there is depicted the complicated picture of the life of Kazakh society in the second half of the XIX-th century, the inter-clan and the class struggle, the awakening of the protest against oppression, there is shown the width and beauty of the freedom-loving soul of the Kazakh people, his dreams about better life. The humanist and thinker Abai is disclosed by the author as a versatile public figure. There in the history of the Kazakh people the poet will remain forever as the people’s fighter with the indisputable moral authority, who tried to change the obsolete patriarchal-clan traditions and who believed in the happy future of his people and who brought up many followers of his moral-ethical views. The novel is written with the bright language which delivers the bright colors of the epoch.The novel-epopee “The way of Abai” is a great work, it entered the thesaurus of world literature and it was translated into many languages of the world.

Anuar Alimzhanov (1930-1993) was born in the village of Karlygash of the Sarkantsk district of the Almaty region. A public and political figure, the well-known Kazakh writer and journalist. The winner of the State prize of the Kazakh SSR, the international prizes after Dj.Neru and “Lotus”.A.Alimzhanov went through the way from the rank-and-file journalist to the secretary of the Board of the Writers’ Union of Kazakhstan.

His novels, short novels, stories, essays are varied in thematics and were translated into many languages of the world. The writer addresses the past as well as the modern times.The work of A.Alimzhanov “The return of the Teacher” takes one back to the medieval epoch, to the cities of Central Asia and the Near East. The book contains within itself the texts, in which one can hear the voice of Al-Farabi himself. There in a special chapter are given the extracts from the works of the thinker “The indication of the way to happiness”, “The civil policy”, “The aphorisms of the state figure”, “The tractate about the views of the residents of a virtuous city”. There in the book are also presented the articles which disclose the spiritual image of the scientist-encyclopaedician, the facets of his creative activity, there are disclosed the sayings of scientists about the significance of Al-Farabi in the development of the progressive public-philosophical thought and about his place in the history of world culture.

There at the book exhibition out of the fond of the National library of the RK are presented the materials about the lives and creative activity of the two well-known writers M.Auezov and A.Alimzhanov, their works, translations, recollections and articles on the pages of the periodical press.

We invite everyone to the book exhibition!

We have 349 guests and no members online