On april 17, 2019 at 15.00 hours  there in the hall E. Tursunov held the spring festival "Nauryz – Holi meiramy 2019". The event was organized jointly with the Center of Indian classical dance "Almaty-Kazakhstan". 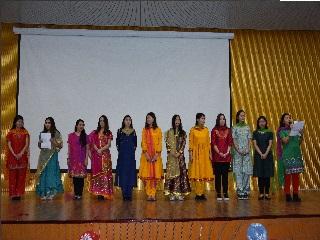 For the Kazakh and Indian nations, the Nauryz and Holi holidays are the symbols of spring renewal, celebration of love, fertility and friendship. It is the holidays of unity. From time immemorial on earth it is the spring equinox, when all life awakens, it was considered a new year, the beginning of a new calculus.

On the occasion, the Deputy Director of the National library A. Yussupova, the Consul of the Representative office of India in Almaty Mr. Martin Sirias Clemens were present in the musical and literary program there were presented folk and modern Kazakh songs and kuis, national dances of the Kazakh and Indian peoples, the poetic performances of the students of Al-Farabi KazNU in Kazakh and Hindi, as well as participants of the Center of Indian classical dance "Almaty-Kazakhstan" under the leadership of honored worker of Kazakhstan Akmaral Kainazarova. The event was attended by the representative of "Tengri Bank", teachers and students of the faculty of Oriental studies of Al-Farabi KazNU, Аsfendiyarov KazNMU, the librarians of Almaty, representatives of the media and readers of the library.

We have 331 guests and no members online