Hours there in the hall of culture and literature of China took place the panel by the theme “The book nears the cultures”. 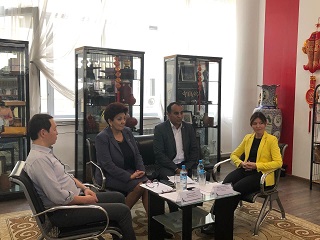 On September 27, 2019 at 15:00 hours there in the hall of culture and literature of China took place the panel by the theme “The book nears the cultures”.

There at the meeting were discussed the role and significance of book in society, the issues pertaining to the quality of translations from one language to another, and also the difficulties and problems of modern translational literature.

There with the word of greeting spoke the head of the Service of world literature S.T.Tuyakova. The moderator at the given meeting was deputy chief editor of the international publishing company “Shygys adebiety zhane onery” Nurgisa Omirbaiuly. He told the audience about the purposes of the publishing house, about the books which acquaint the Kazakhstani readers with the history, culture and literature of China. The professional translators Zh.Omarov and A.Baibolekova shared with the difficulties and problems of translational literature, the experience of work with foreign publishing houses.

There at the meeting the students asked the questions about the peculiarities of translation from the Chinese language, which Nurgisa Omirbaiuly answered in detail.

There in the activity participated the students of the Kazakh university of international relations and world languages after Abylaikhan, the International Kazakh-Chinese lingual colleges, the teachers of the universities and colleges of Almaty city, librarians and mass-media representatives.

We have 234 guests and no members online